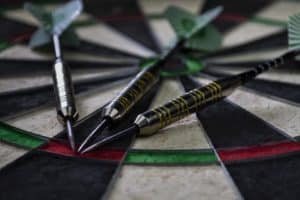 Darts remains a hugely popular sport to wager funds on for punters, with tournaments happening regularly. Major events such as the Premier League, the World Championships and Grand Slam are the highlights of the darts calendar, where the world’s best players face off for some of the most prestigious titles in the sport.

Smith might not have been everyone’s favourite to win the competition, but he’s already shown his quality with an impressive win over Jonny Clayton earlier in this year’s tournament.

However, Smith faces a tough task to progress into the next round, as he’s set to come up against Gerwyn Price, who remains the favourite to win the competition. But if Smith can replicate a similar performance to that of when he beat Clayton, then he could be worth a punt at the sizeable price of 5/1 with Betfair.

You could be forgiven for not knowing much about Callan Rydz heading into the 2021 World Championships, but he’s certainly making a name for himself with a number of eye-catching displays.

He’s only dropped one set in this year’s tournament and has already thrashed Nathan Aspinall 4-0 in a hugely impressive win earlier in this year’s competition. His price is slightly larger at 9/1 with Betfair, and he’s set to take on Peter Wright for a place in the semi-final, in what is certain to be an entertaining clash between both players.

At a price of 9/1 with Betfair, you’d be foolish not to put some of your spare change on Rydz in this year’s competition, in what is likely to be a closely-fought battle to reach the final.

Wade has already shown his quality with tournament wins in the past and will be eager to go one step further and pick up a tournament win here in the 2021 World Championships.

In a slightly favourable side of the draw, he’s certainly worth a punt at 12/1 with William Hill.

Unsurprisingly Price is heading into another darts major as the favourite, although the likes of Jonny Clayton and Michael van Gerwen will push him close for the win in this one. He hasn’t looked at his best in recent tournaments though, having been knocked out of the European Championships by van Gerwen, before being narrowly beaten 10-9 by Jonny Clayton in the World Series of Darts Finals. If Price can recapture the sort of form that saw him win the Gibraltar Darts Trophy and the Hungarian Darts Trophy, then he’ll be tough to beat.

Having thrashed Peter Wright in the final of the Grand Slam of Darts, it won’t come as a surprise to hear that Price will head into the World Championships as the favourite.

Wright has shown glimpses of his quality this season, having won the World Matchplay title earlier this year, having beaten Van den Bergh in the final of the event. Wright won the World Championship back in 2020 and will be amongst the favourites to challenge for the title in this year’s tournament. He was on a six-match losing run heading into the Grand Slam of Darts but went on to reach the final of the competition, where he was beaten by Gerwyn Price.

Smith has already beaten Jonny Clayton in this year’s competition, and he’ll be a real danger to Gerwyn Price in their quarter final on New Year’s Day, in what is set to be an enthralling encounter.

Anderson stunned Ian White with a stunning comeback earlier in this year’s tournament, before edging past Rob Cross in the last 16, and if he’s at his best, he’ll be in with a great shout of progressing into the final this term.

Rydz has emerged as the shock contender for the 2021 World Championships title this year, especially since he’s only lost one set in this whole tournament. He’ll take on Peter Wright for a place in the semi-final on New Year’s Day.

Wade has a considerable amount of experience of playing at a high level, and it’s somewhat surprising to see him priced so highly despite a slightly favourable side of the draw.

Humphries takes on Gary Anderson for a place in the semi-final this year, having beaten Chris Dobey and Rowby-John Rodriguez in the earlier rounds of the tournament. He was also given a walkover win against Dave Chisnall, who was forced to withdraw from this year’s event.

King is set to take on James Wade in his quarter-final and will be keen to build on some strong performances. He’s beaten Raymond Smith, Steve Lennon, and Ryan Joyce in his route to the quarter-final of this year’s competition.

The PDC World Championships began in 1994, with Dennis Priestley beating Phil Taylor in a 6-1 thrashing at Circus Tavern before Taylor went on to win 12 of the next 13 tournaments.

Since 2008, it has been held at Alexandra Palace in London, and Gerwyn Price will be looking to defend his title, having beaten Gary Anderson in the final of last year’s competition.

Since Phil Taylor’s dominance of this tournament concluded in 2013, there have been plenty of different winners of the PDC World Darts Championships. Listed below are the winners of the tournament from the last six years.

The Premier League is a hugely popular event for darts fans and players to enjoy in the sporting calendar, with the world’s best battling it out to be crowned the winner of the event.

The world’s top four players automatically qualify for the event and are then joined by six wildcard selections that are made by the PDC and Sky Sports. A round-robin format then takes place, before the top-four are split into two semi-finals, with the winner of those taking on each other in the final.

The 2022 Premier League Darts is set to get underway on Thursday 3rd February, with Jonny Clayton looking to defend his title, having beaten Jose De Sousa in 2021, in an impressive 11-5 win in the final.

The likes of Glen Durrant, Michael van Gerwen, Gary Anderson, and Raymond van Barneveld have all won the Premier League Darts title in the past, and they’ll be hoping they can challenge Clayton for this year’s title.

The 2021 Grand Slam of Darts takes place from 13th November to 21st November, with the world’s best players coming face to face in Aldersey, with the winner of the event scooping £125,000.

Gerwyn Price won the 2021 event, as he beat Peter Wright 16-8 in the final of the competition, having beaten the likes of James Wade and Jonny Clayton on his way to the final.

Price will be looking to build on this impressive showing as he turns his attention to the upcoming World Championships.