MyBettingSites’ Supercomputer has updated the growth of this year’s contestant’s streams, views & followers ahead of the competition start.

UK’s Sam Ryder has gained the most Instagram followers since mid-April, gaining 139 000 followers in less than a month. Italy’s Mahmood and Blanco have gained the second most followers – nearly 80 000 combined followers. San Marino’s Achille Lauro is in third place with a gain of 55 000 followers.

Overall, Italy’s Mahmood and Blanco have the most followers out of this year’s lineup, as of 9th of May – 3.779 million. UK’s Sam Ryder has the second most followers, and the most as a solo individual – 3.739 million.

When taking into account both the YouTube views on the Official Video on the Eurovision channel as well as the National live final performance, Serbia's "In Corpore Sano" has gained the most views since mid-April, with 2.7 million views growth. Ukraine's "Stefania is in second place with growth of 1.5 million views and Spain's "SloMo" is third with 1.18.

As of 9th of May, Albania's "Sekret" has the most  combined views on their 2022 Eurovision videos to date - 6.5 million views. Spain's "SloMo" is second with 6.3 million views and "Brividi" is third with 4.8 million views.

Italy's "Brividi" has gained the most streams since mid-April - nearly 7 million streams, with Sweden's "Hold Me Closer" in second place and Netherlands' "De Diepte" in third place.

PREDICTED WINNER ACCORDING TO HISTORY

Taking into account all Eurovision winners since the competition’s inception in 1956, the most prolific winning profile is the following: 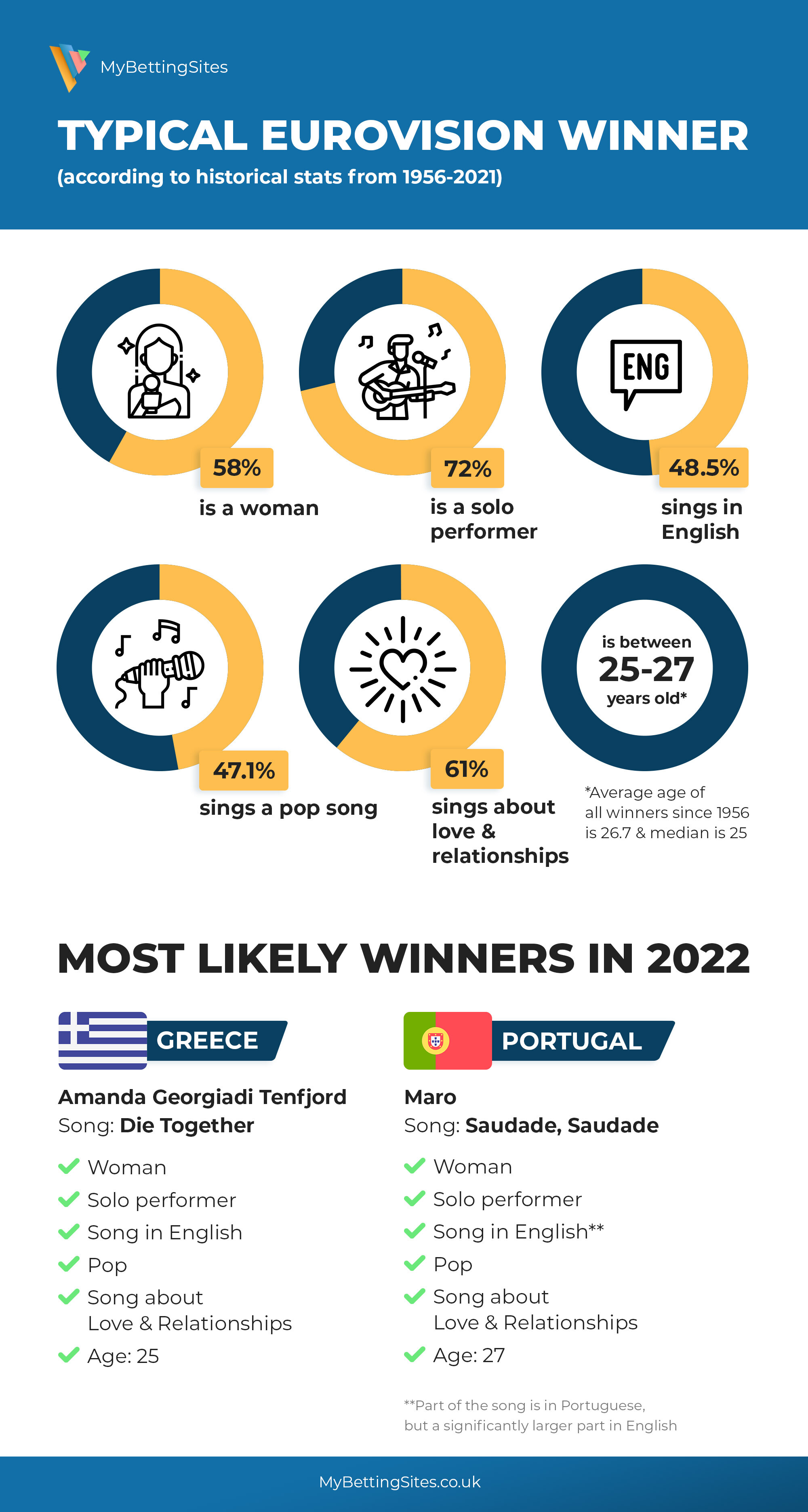 Out of this year’s lineup, Greece and Portugal have most of the corresponding characteristics, making them the most likely winners according to historical stats.

Popularity plays a big part in determining the winner of the Eurovision, which is where Italy & UK are winning as of today - the Italian duo Mahmood and Blanco have 3.7 million combined followers on Instagram, the same number as UK’s Sam Ryder. San Marino’s Achille Lauro is the next most followed artist with 1.7 million followers.

Italy also leads when it comes to their current streaming numbers. Mahmood and Blanco’s song “Brividi” has amassed 75.6 million streams on Spotify, which is 5 times more than the second most streamed song of this year - Sweden’s “Hold me Closer” sung by Cornelia Jakobs with 14.9 million streams. “De Diepte” by S10 from the Netherlands is in third place with 11.7 million streams.

When looking at Eurovision’s YouTube channel, “Stefania” by Ukraine’s Kalusch Orchestra has the most views on the official music video - 3.5 million - followed by Austria’s “Halo” by Lumix feat. Pia Maira with 3 million views and Netherlands’ “De Diepte” by S10 with 2.8 million views.

The top 3 differs when considering only the official national live performances - Spain’s “SloMo” by Chanel is first with 4.2 million views, Norway’s “Give That Wolf a Banana” by Subwolfer with 3.6 million views is the second place and Albania’s “Sekret” by Ronela Hajati with 3.1 million views is in third place.

Eurovision has produced many successful songs and artists. The most streamed songs of the past winners, “Arcade” (Netherlands) has 690 million streams on Spotify, last year’s winner “Zitti e Buoni” by Maneskin (Italy) is nearing 300 million streams.

Maneskin is also the most followed act out of all the winners, with 5.9 million Instagram followers. Second most-followed winner is Céline Dion with 5.1 million followers.

Lastly, the graph below shows which countries have won multiple times in the past. Ireland has won the most trophies, with 7 wins, Sweden is second with 6 wins and Netherlands, Luxembourg, France, and the United Kingdom tie for third place with 5 wins each.

This year's Eurovision qualifiers are already underway, with odds-on favourites Ukraine booking their spot in the final of this year's competition. It's set to take place in Turin, Italy, and is set to be an event which is watched worldwide. Below, we've listed you with the betting odds of the top-five favourites to win Eurovision 2022.

Our recommended betting offer is from SBK, as they have a great welcome bonus that new customers can use on Eurovision betting markets.

They're offering £30 in free bets to use when you deposit and wager funds of £10 on their sportsbook. It's important to remember that to be eligible for this offer, you have to deposit using a Visa Debit Card or Trustly, otherwise, you won't be able to access the £30 in free bets on offer.

With competitive odds on favourites such as Italy to win Eurovision 2022, SBK are well worth considering for betting on this tournament.