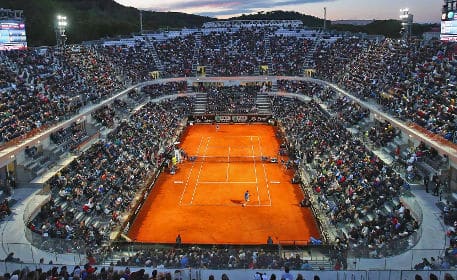 The favourite for the Rome Masters is Rafael Nadal. He has won here five out of the last ten times, and made the final seven times. Djokovic has won four times, and of course Andy Murray won here last year. Nadal’s track record here is fantastic, and his current form on clay is his best for many years. Year to date he has won all 15 matches on clay, with 88% of service games won.

It’s incredible form that he has found at the later stages in his career, especially when one makes consideration to the injuries he has endured. Those 15 wins this year has meant successes on clay at Monte Carlo, Barcelona and Madrid. His form should lead to more success at Rome, and at priced at just 1.83, that is certainly what bookmakers think too.

He beat Djokovic in the semi-final in Madrid. Djokovic has described himself being at a ‘transitional’ stage in his career. This time last year, he was ranked number one in the world, and shortly after, had completed a career grand slam. For such a talented player to achieve so much, he then subsequently found ’emptiness’, and faced a new challenge of motivation. After all, what is there left for him to achieve?

Last month he fired his entire coaching team as he starts on this quest to transition into a new stage of his career. Despite this challenge, Djokovic is still more favoured than Murray at Rome.

Murray, although the top seeded player going into the Rome Masters is only fourth favourite to win here, and can be backed at odds of 10.00.  His current form is not good, and there is mixed speculation to either him being burnt out after a demanding 2016 (including an intensive training block in December) or  whether he has yet to recover fully from shingles at the beginning of this year. 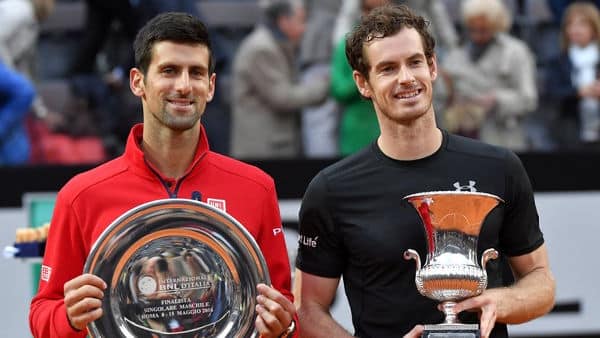 Murray won’t have it easy at the Rome Masters either. In the third round, he is set to face in-form Alexander Zverev. Zverev would however also be fatigued, having reached the quarter finals of the Madrid Open it means he had played eight matches in just ten days. With just a few days rest between the tournaments, Murray will be better favoured against the youngster. He will still need to face Milos Raonic, Stan Wawrinka and Marin Cilic following success against Zverev.

However he fares, it is not possible for Murray to lose his World Number One ranking.  He will be defending the 1,000 points he accumulated winning at Rome last year, and after Rome he will be defending 1,200 points he earned reaching the final of the Roland Garros final. Eyes will be on both Murray and Djokovic to see if they can challenge Nadal and his resurgence of form.

How to Watch The 2017 Rome Masters

It is possible to stream the Rome Masters, with it available at a few bookmakers including Bet 365 and Betfair.

Not many of the bookmakers currently have a market for the outright winner at the Rome Masters.  One of those who does is Bet Victor, who for all of the reasons above heavily favour in-form Nadal to win.

There are not many specific offers for the Rome Masters, which means you’ll need to look at some of the ‘always on’ tennis offers that betting sites have running.

T&Cs ApplyNew Customers only. £10 min deposit. The bonus will be applied once the full deposit amount has been wagered at least once with cumulative odds of 1.5 or greater. Wagering must be cleared within 60 days. This offer may not be combined with any other offer. Deposit balance is available for withdrawal at any time. General deposit method & withdrawal restrictions apply & full T&C\'s apply.

T&Cs ApplyNew Customers only. Deposit and place a £5 qualifying bet at odds of 2.00 or greater within 7 days of opening a new account; excludes cashed out bets. Receive 2x £10 Free Sports Bets, valid on set events only at odds 2.00 or greater, expires in 7 days, plus a £10 Casino Bonus, expires in 7 days. Wager the Casino Bonus 35x to withdraw winnings. Credit/Debit card deposits only. Geographical Restrictions and T&Cs Apply. Please Gamble Responsibly

T&Cs ApplyValid for new UK customers who have registered from 31/03/2020. Deposit using code SNWEL125. Valid once per customer. Bonus expires after 90 days. 6x turnover at 1.7 minimum odds before withdrawal. Max contribution to turnover requirements per bet is £100.

T&Cs ApplyNew customers only. 18+, BeGambleAware.org. Minimum deposit £10. Place any sportsbook bet (except Racing) of £20+ at minimum odds of 1.40 (2/5) to receive your free bets and casino bonus. 35x wagering on casino bonus. Free bet will expire 7 days after opt-in. £20 Casino bonus will expire after 30 days of opt-in.