What is a Heinz Bet? A Simple Explanation to How it Works 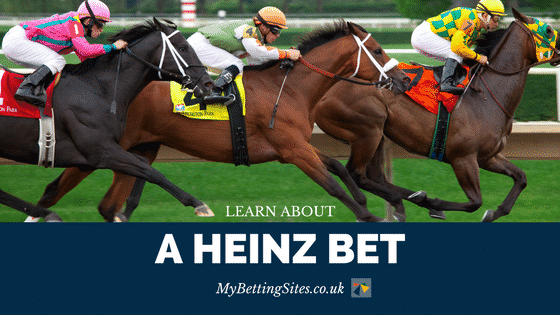 What is a Heinz Bet?

When you place a Heinz bet, you are placing 57 bets on six different selections. A £1 win-only Heinz bet would, therefore, cost £57.

A Heinz contains no single bets. At least two of the six selections must win for any return to be achieved on the bet.

It is named after the food company Heinz which is synonymous with the number 57. Often Heinz products have ’57 varieties’ on their packaging, as the founder, Henry J Heinz believed the number 57 to be lucky.

Work out your winnings with our Heinz Bet Calculator.

How Many Selections Need to Win for a Heinz Bet to Be Profitable?

There is no universal rule for how selections need to win for a profit to be achieved, as it will depend on the pricing of each selection. If all the selections are roughly the same price, then the below example provides an indication.

Around three winning selections can provide break even. Four or more is likely to generate a profit. These are only example prices, with six selections, it is possible to see how a fully winning Heinz bet can generate very high returns.

Why Make a Heinz Bet?

The very high returns a Heinz can generate are appealing to punters. The same high return could be achieved with a single six-fold accumulator, but it would require all selections to win for a return to be generated.

A Heinz bet is a more exciting way to bet on a multiple as it increases the chance of a return.  Providing two of the six selections win, some returns will be generated.

The disadvantage of a Heinz bet is the higher stake it requires. With 57 bets instead of one, the stake will be much higher. You need to consider if the increased chance of winning is worth the higher stake.

Is It Possible to Place an Each Way Heinz Bet?

Yes. To know on which odds you could place a bet, come check out our selection of UK betting sites.

An each way Heinz bet consists of 114 bets. 57 bets are as described above, and 57 additional bets are for the selections to place.

We have another article that explains how each way bets work in more detail.

What Is the Difference Between a Heinz and a Lucky 63?

Lucky 63 bets also feature six selections, but there is a key difference.

A Lucky 63 features all of the bets in a Heinz but also features an additional six single bets.

A Heinz bet consists of 57 bets over six different selections. It has 15 doubles, 20 trebles, 15 four-fold accumulators, and six five-fold accumulators and one six-fold accumulator. Although it has a higher stake than a traditional accumulator, it does make a return more likely. A Heinz Bet will certainly suit some bettors in specific situations but it’s not for all.