What is a Lucky 63 Bet? A Simple Explanation to How it Works 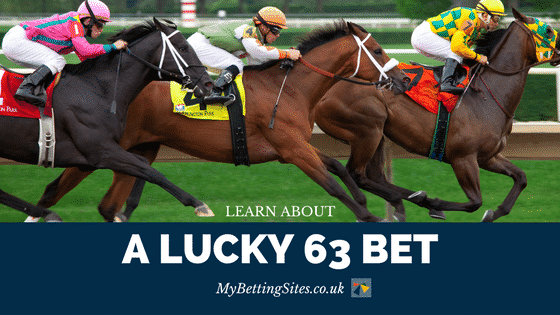 The Lucky 63 is a 6 selection wager consisting of 63 separate bets: 6 singles, 15 doubles, 20 trebles, 15 four-folds, 6 five-folds and a six-fold accumulator. Named after its 63 parts and the ‘lucky‘ bonuses available, the lucky 63 is an aptly named bet

The amount won from a Lucky 63 bet depends on the number of selections that win and the price of each. Because a Lucky 63 bet contains single bets, only one win from the six selections is required for a return on the bet. It is extremely unlikely though that should only one selection win, that a profit is generated.

To know on which odds you could place a Bet, come check out our selection of the best betting sites.

Work out your winnings with our Lucky 63 Bet Calculator.

How Many Selections Need to Win for Lucky 63 to Be Profitable?

What Are the Advantages of Making a Lucky 63 Bet?

One benefit of a Lucky 63 is that it significantly increases the chance of a return on a multiple bet.  A traditional accumulator is lost when just one selection doesn’t win. If you’re more confident the majority of your selections will win, then a Lucky 63 will increase your chances of a positive return on your stake. It can be regarded as a higher stake, higher reward bet.

From a different perspective, the disadvantage of a Lucky 63 bet is the stake required.  With 63 bets, the cost of placing a Lucky 63 can be very high. You need to consider if the increased chance of winning is worth this higher stake.

Is It Possible to Do an Each Way Lucky 63?

Yes. Each way Lucky 63 bets consist of 126 bets. 63 of the bets are to win, as in the bullet points above. 63 extra bets in an each way are for the selections to place. We have another article that explains how each way bets work in more detail.

What Is the Difference Between a Lucky 63 and a Heinz?

A Heinz bet also features six selections, but there is a key difference. A Lucky 63 has 63 bets. In contrast, a Heinz has 57. It has six fewer bets as it does not feature the six singles bets.